Michael Vargas announced on August 11th that he is running for the Elk Grove Unified School Board in the November 2022 election. He proudly addressed his stance on educational equity, inclusive school environments, why his background would support his role and the value of his perspective as being openly LGBTQ, in a recent interview.

In the beginning, innate curiosity in student development guided Michael’s involvement in equity programs. He expresses the privilege of helping youth evolve, whether in the classroom, or in life.

“I became interested in students’ transitions from high school to college, what the developmental processes were, and more. This inspired me to earn a Masters in Education and work in positions of counseling.”

In doing so, he’s worked in many environments that require critical thinking and understanding. Furthermore, he also navigates conversations of various standpoints. He also aims to encourage positive pathways for teaching pathways in EGUSD.

“One growing experience I had was in college. It was volunteering for a program that brought underrepresented students from the local unified school district on to campus to encourage them to pursue higher education.”

Observing and involving himself in these environments kicked off and continued his efforts in leadership.

First and foremost, he plans to address the overlaying impact of the pandemic and recovering from the learning milestones that may have been missed.

“There’s the social and developmental piece where every single grade level, sixth grade to senior, has lost key aspects of interaction. We’re now as a whole figuring out how to move forward.”

Not only are students challenged in catching up, but also parents and families. All require an equity lens and continuing strides district wide to create positive impact is important to him.

One way he aims to initiate this goal is by allocating up more funding for student body opportunities. This funding would be specifically toward exploring post high school options. Overall, while adjustments are necessary, Michael feels utilizing these tools and strategies will lead to successes in school and in life.

Beliefs on Primary Role in the Office

Initially, Michael believes there are a couple areas where he can provide a unique perspective.

Being assertive, as well as, being as available as possible is necessary for making informed decisions. He stresses that every experience becomes a sticking point. It can’t just be tolerance if we’re trying to cultivate community culture. Having worked in several at-promise communities has taught Michael on how to build supportive relationships.

“As appointed appointed officials, we need like-minded individuals who are familiar with a multitude of challenges in order to treat each task with understanding.”

Focus on Community and School Environment

Next, Michael amplifies his call for everyone to feel comfortable, tackling tough issues to enable a safe school environment.

“Where I can be particularly useful is by continuing to push conversations around LGBTQ, nonbinary, and ally students to the forefront and making tough dialogues a priority.”

Navigating self expression at a young age can be challenging, and students primary focus should be learning. Reducing barriers is no small feat, but it is not impossible for the agenda.

Additionally, ensuring that lesson plans reflect the diversity of the students being taught in Elk Grove. Michael conveys that students tend to feel more connected with characters or stories that mirror similarities of personal life, or even appearance. Understanding what a student is drawn to can bring value in bridging these gaps on administrative levels.

Overall, Michael plans to focus on developing more genuine community engagement that reflects the diversity of Elk Grove He has confidence in his ability to serve EGUSD as an attentive and active board member.

“With my experiences, I can serve as a role model for students and encourage them to advocate for themselves in their learning environment and say ‘I can do this’ “

Michael Vargas’ plan for a more equitable and inclusive school district has underscored his campaign for EGUSD board member. For more information regarding his campaign, go to Michael Vargas Campaign page. 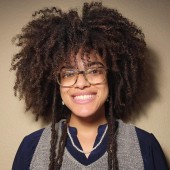 Trinity Haynes is our Staff Writer and Photographer. She is a freelance artist, activist, and more pursuing her degree in Business and Communications. Trinity has earned numerous academic accolades for design development and writing. As a Sacramento native, she immerses herself in organizations which better the community.